Often, superstar speakers can be frustrating because their high profile means they have to be carefully diplomatic, and hence they don’t say anything interesting. Even then though, it’s not what they say so much as how they say it that’s important, because it gives us an insight into how they think, which to me is perhaps the most important takeaway of all. But every now and then, a celebrity is not just candid but also lets us into the workings of a fascinating mind, and these lectures tend to be the best. Yesterday, Mohammed Yunus gave one of the best talks I’ve seen yet at the Kennedy School Forum.

“I never thought I’d be a banker”, he began. “I thought I would be a pilot or a captain or a policeman. So don’t worry about what you are going to do. Do it as it comes.” For those of us about to graduate and unsure what to do next, it’s nice to have a Nobel Prize winner tell you not to worry about it. 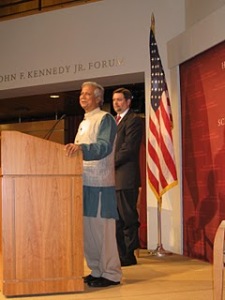 What later became the Grameen Bank was initially a loan of $27 given to a few Bangladeshi women during a famine, where Yunus realized that teaching economic theory was meaningless when people are dying all around you. The success of this tiny loan eventually inspired the creation of the Grameen Bank. “People thought I was an angel for giving them this loan”, Yunus said. “So I thought, if I can be an angel for $27, I should do it a whole lot more.”

After nearly thirty years of micro lending, Yunus claims that five years of successful borrowing from Grameen can get you out of poverty. “Poverty is not created by the poor”, he stated. “It’s imposed upon them by the institutions we have created, the systems and concepts we decided should govern society. But because it’s an artificial imposition, it can be peeled off. That’s why 64% of people can move out of poverty with their own effort, if you can just give them a little credit to get started.”

One of the parties most guilty of this is the banking sector, because they make it so difficult for anyone to get credit, let alone the poor. “This sort of business is based on the theory that all everyone cares about is maximizing profit. So then they build a whole theory of our natures around this. So now everyone is busy fitting themselves to this theory, rather than have the theory fit us. But this is wrong because people are so much bigger than mere money-making machines.”

How exactly does the man widely known as the father of microfinance define the field he created, now that the field is evolving and spreading so many different ways? “I have a strict definition”, he says. “Microcredit is small loans to the poorest people, usually women, without collateral or guarantee, for income generating purposes, at a reasonable interest rate.”

When asked to compare Grameen Bank with some of the more profit-oriented approaches to microfinance, his answer was crisp and rather sharp. “The rate of interest should be the cost of the fund plus 10%. Upto 15% is ok but not ideal. Greater than 15% puts you in the territory of the moneylenders. And it is the moneylenders we have been fighting right through our existence.”

When asked about whether microfinance actually helps the poorest of the poor (one of the leading criticisms about microfinance currently being bandied about), he described how Grameen Bank gives loans of upto $15 to beggars. Naturally, climbing out of poverty is a much slower process for the poorest. “It takes time. When my colleagues get impatient with how long the beggars take to become more secure, I tell them to be patient. After all, they are simply in the process of closing down their begging division and strengthening their sales division. Restructuring always takes time!”, he ended with a smile that got the whole audience chuckling. 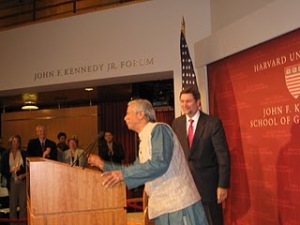 He recounted an anecdote from the Nobel Prize ceremony to illustrate just how much the Bank is owned by the people. “When the Nobel committee told me that half the prize is going towards the bank, they asked me to bring one of the bank’s owners to the ceremony as well. I told them that the bank has 7.5 million owners. Now, given that Norway only has 4.5 million people, this presented a bit of a problem. But eventually, we brought one representative. To see one illiterate Bangladeshi woman give a Nobel Prize acceptance speech in front of kings and queens, televised globally…well, that’s just a beautiful thing.”

So it is. It’s also a beautiful thing to see someone use a combination of humility and a powerful vision to inspire an 800-strong crowd that has become jaded from watching a few too many uninspiring and dull heads of state.

This entry was posted in Harvard Sixth Course. Bookmark the permalink.